Looks like HTC is still alive in terms of smartphones and a new leak confirm that the company will be announcing a new mid-range phone soon. Reported by a popular tipster @LlabTooFeR, revealed that the new phone will come with modern design and decent specifications. The phone will be named HTC Desire 20 and will have 3.5mm jack. Let’s check out the complete details. Currently, HTC is struggling to hold its name in the smartphone industry where it was one of the top player some years back. However, in the past year the company has been announced few phones in the mid-range price range. Now, a new leak confirm that for 2020 the company will be launching a new HTC Desire 20 Pro device. 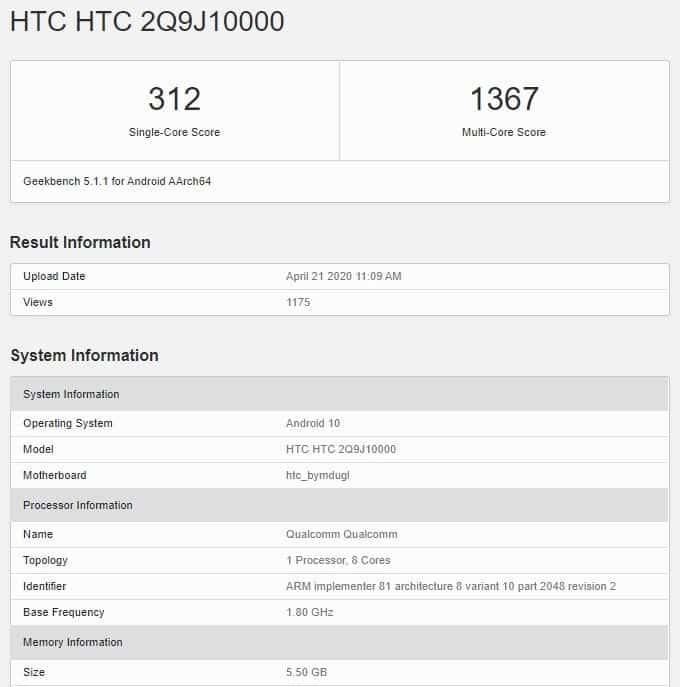 As per the image, the front of the device has a punch-hole display like the recently launched oneplus 8 phones and the rear of the phone has triple camera setup. The rear design is similar to Mi 10 phone. Apart from this, a Geekbench score revealed the specifications of the new HTC phone. It shows that the device will be running Android 10 and be powered by decent chipset like the Snapdragon 665. Also, this could be the HTC Desire 20 and not the Pro version. It comes with 6G RAM.

We expect more details on this new HTC phone to be surfacing online soon. Let us know your thoughts on this smartphone and HTC brand in comments below.